Is A Valerian Overdose Possible For Cats?

As an affiliate, we may earn a commission from qualifying purchases. We get commissions for purchases made through links on this website from Amazon and other third parties.

Pet owners enjoy spoiling their pets and enriching their lives where possible. Most people know that some cats love catnip. They will play with toys stuffed with catnip for hours. Other substances have a similar effect to catnip, and valerian root is one of them. Cats are attracted to catnip and will have a wild play session with valerian stuffed toys or toys sprayed with valerian root extract. Many responsible owners have asked if valerian is safe for cats and if it is possible for cats to overdose on valerian.

There is little scientific data available on valerian use in cats. Valerian is a safe herb to use with cats. Any suspected valerian overdose resolved without veterinary intervention. Do not use in conjunction with other medications or for pregnant or lactating cats or in kittens under 3 months.

This article will look at how valerian works in cats and if cats can overdose on valerian root. Safety protocols will be explained, and what situations require cautious use of valerian or when it should be omitted.

Valerian is a herb that grows naturally in Europe, parts of Asia, and North America. It has been used for centuries for various ailments in humans, particularly for sleep and anxiety disorders. The plant’s root contains most of the beneficial compounds and is dried and used to create herbal remedies.

Why Are Cats Attracted To Valerian?

Valerian root contains a pheromone (a chemical substance that uses smell to affect the behavior of animals) known as actinidine. Plants exude this chemical to attract predators that will chase away herbivorous insects that could damage the plant. Cats are attracted to actinidine and react by sniffing the object or plant, licking it, rubbing themselves on it, and rolling around playfully. Some cats will bound around, salivate and drool.

Do All Cats Respond To Valerian?

Only approximately fifty percent of cats have the gene that makes them respond to the actinidine in valerian. Interestingly lions, cheetahs, leopards, and snow leopards also respond to valerian, but tigers do not. The cats respond by first having a euphoric playful phase that lasts 5 – 30 minutes. Once this phase wears off, the cats go into a refractory (calm) period that can last from 30 minutes to 120 minutes.

How Does Valerian Root Work On Cats?

The actinidine attracts the cats and stimulates the pleasure center of the brain. The cats become euphoric and playful and will ignore prey or sexually active cats of the opposite sex. Valerian root contains valerinic acid that acts on a neurotransmitter, GABA (gamma-aminobutyric acid), in the brain. This acid increases the amount of GABA in the brain, which produces a sedating effect on animals and humans. Even cats that are not responsive to actinidine will experience sedation if the valerian root is administered orally.

What Is Valerian Used For In Cats? 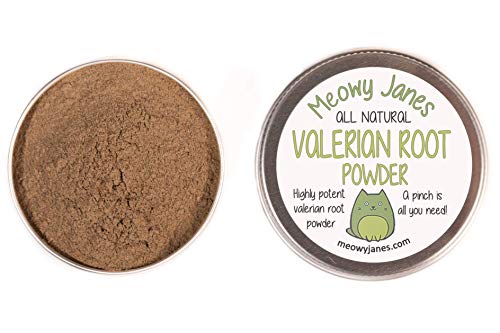 Valerian root is often used to stuff toys to enrich cats’ lives. Only one-third of cats respond to catnip, but fifty percent respond to valerian. Valerian is used in enrichment toys for cats that do not respond to catnip. The sedating effects of valerian are beneficial for cats that are hyperactive, anxious, noise phobic, or have separation anxiety. Many people also use valerian to sedate their cats for a veterinary visit or when traveling. Valerian may be given orally to the cats or presented in a valerian-filled toy, or sprayed on a blanket. Some holistic veterinarian practitioners prescribe valerian as an anti-seizure and anti-spasmodic medication.

No scientific studies have studied the safety of valerian use in cats. Based on anecdotal evidence, it would seem that valerian used in isolation is a safe herb for cats. The American Society for the Prevention of Cruelty to Animals has classified valerian as a safe herb for pets with a wide safety margin. Human case studies have reported on humans that have tried to commit suicide by overdosing on valerian. Until now there have not been any deaths from valerian overdose, and there was no lasting damage to internal organs.

Can A Cat Overdose On Valerian?

There have been cases and anecdotal reports that some cats appear to overdose or become drunk on valerian. They may become uncoordinated, unsteady on their feet, vomit, or become heavily sedated with a drop in body temperature. There are no reported cat deaths from valerian in any of the veterinary scientific literature. Usually, the cat’s symptoms disappear without veterinary intervention within an hour to an hour and a half.

Although valerian is a safe herb to use with cats, it is possible that an individual cat may have an allergy to the plant and its extracts. If you have not used valerian with your cats previously, use the herb cautiously in the beginning. An allergic response would show the following symptoms:

Valerian should not be given with any other drugs unless the veterinarian has confirmed the safety of concomitant use. Some medicines that should not be used in conjunction with valerian are:

If your cat is having an anesthetic, do not use valerian for your cat for two weeks before or after the anesthetic. Valerian will exacerbate the sedating effects of the anesthetic and could be fatal. Mixing valerian with other drugs and herbs can cause liver toxicity and liver damage.

Can Valerian Be Used With All Cats?

Pregnant or lactating cats should not have any valerian. There are no studies that have investigated valerian use in this population. Pregnancy puts a strain on the mother cat’s

liver, heart, kidneys, and lungs, and any substances that might affect these organs in any way should be avoided. It is also possible that valerian could affect the unborn kittens. Young kittens up until three months of age do not respond to actinidine in valerian. It is not advisable to use valerian with kittens younger than three months as a precaution.

Cats with kidney, liver, heart, or lung conditions should not be exposed to valerian either in a toy or as a dietary supplement. The compromised state of the affected organs may make the cat more susceptible to valerian sedating effects, which could have adverse outcomes. One study indicated that valerian causes a reduction in cardiac function, which may not cause a problem in a healthy cat but would be problematic in a cat with compromised heart function.

Certain lines of Siamese cats show heightened sensitivity to a wide range of medications. It would be advisable to avoid valerian or use it with extreme caution with these cats.

What Is The Correct Dose Of Valerian For A Cat?

Unfortunately, valerian is classed as a food supplement in most countries. It is not subjected to the stringent regulations that medicines face. The result is that valerian products vary a great deal in their quality and purity and may even vary between batches from the same supplier. There are also no official recommendations on the correct dosing for pets. The wisest approach would be to consult your veterinarian to determine which products the veterinarian deems reliable and follow the prescribed dosing regimen either from your veterinarian or on the product label.  Toys filled with valerian can be used without concern for dosing. It is probably best, though, to limit the cat’s play with the toy to 20 – 30 minutes. After this time, remove the toy and place it in a sealed container.

What Is The Best Valerian Supplement?

Valerian may be considered to be a safe herb to use with your cat. If your cat appears to have overdosed, observe your cat closely for 30 to 40 minutes to note any changes. If your cat seems to be worsening, take your cat to the veterinarian immediately. Some cats may show an individual allergy, in which case, prompt veterinary treatment is needed. Use valerian cautiously when you are using it for the first time with a cat. Remove valerian-filled toys after 20-30 minutes of playtime.

Sophia is a lifelong cat lover and passionate advocate for feline health and nutrition. With years of experience working with cats, she profoundly understands these beloved pets’ dietary needs. In her blog posts, Sophia shares her expertise on cat food and nutrition, providing valuable information and advice for cat owners. She also stays up-to-date on the latest research and developments in the field, ensuring that her readers have access to the most accurate and current information.

As an affiliate, we may earn a commission from qualifying purchases. We get commissions for purchases made through links on this website from Amazon and other third parties. Read more in our Privacy Policy.